KEEPING THE OVERVIEW AND CONTROL – IN THE FEKOR CONTROL STATION

You need a quick overview of the processes in your company. That’s why we have developed a control center with the help of which you can plan and control processes. 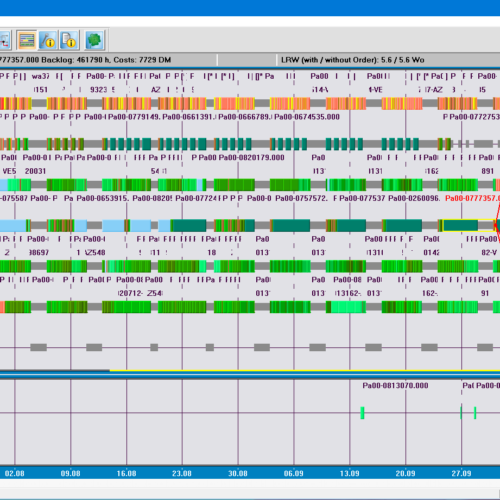 With zoom-in and zoom-out, he selects the time period from an 8-hour shift to a yearly overview. The colour display in the FEKOR control station enables the planner to recognise bottlenecks or difficulties immediately and to take appropriate measures. The planner can quickly get an overview of the situation without having to compare figures in lists. The planner decides via drag & drop on a new order sequence and the system takes over the calculation in the background.
For each change, the availability checks required for all orders are carried out within seconds and their effects are displayed. The planner has everything at a glance on one screen and becomes the manager of the orders.

Materials management and detailed planning belong in the control center.

Many companies differentiate between rough and detailed planning. With this subdivision, the planner often discovers difficulties beyond the coming week too late and can no longer react early.
With FEKOR, the separation between rough and detailed planning is no longer necessary. Impending bottlenecks are detected at an early stage and can thus be eliminated by additional shifts or suitable alternatives.

An advanced control centre system such as FEKOR combines materials management and production planning at MES level and thus takes all interdependencies into account.
An example: If an order is brought forward and he removes the material from another order, the control center automatically shifts the “stolen” order to a point in time after the next material delivery.
In addition, a control center works fundamentally differently from an ERP system: ultimately, it represents the entire reality of a production plant, knows the resources, the rules and the alternatives, and can optimize them: If an article may not be operated in the night shift, because otherwise an increased reject rate would have to be expected, then he does not plan this. And if cheaper alternatives arise in the short term, he implements them. The link between production planning and materials management also makes it possible to adapt the order proposals to the specifically planned production orders. For a user, such a change has permanently reduced inventories by 30 percent.

With the FEKOR production control station we offer you flexibility, control, planning and control quality.

Control over production and disposition in the production control center

Rapid recognition of the company-wide consequences of planning measures

The planning board visualizes production processes and their interrelationships.