A student internship offers us the opportunity to help our interns find their way in a world that is often opaque for them and to broaden their horizons. This year we were supported by our intern Lia for two weeks. Here she reports about her experiences

I asked myself how I could still use my holidays sensibly. Therefore I thought about doing an internship at FLS. However, my expectations were not very high. I just thought: What can you make big in an IT company if you are not a professional and have never been involved in it? I had the usual cliché in my head, that of an intern who just makes coffee and goes copying. But my expectations were absolutely exceeded. I was allowed to work in social media (the area that interested me the most anyway). One of my biggest surprises here was that I was allowed to write my own articles for the website. I would never have believed it before. Therefore I did some research and thought about how to make them interesting and appealing. Furthermore I thought before my practical course that one cannot create anything right in such a short period of time. Here, too, I was taught better. I did a lot of research and dealt with the topic of “social affairs”, for example how this point is structured on the website of other companies. Within the two weeks, we also contributed “Social Affairs” to the FLS website.

Besides my experiences in social media, from research to creating a new point on the website (with the help of WordPress and other CMS, which I also got to know), I actually took a lot with me from the field of IT. As I mentioned at the beginning, I could never really do anything with computer science before, which never bothered me, because it didn’t interest me very much or I could have used it. I thought. My internship at an IT company really brought me closer to computer science. Even though I worked most of the time in other areas, I was also allowed to look into the areas of a developer. The example of a chocolate factory showed me how to produce chocolate most cost-effectively and quickly using the system. For example, nut chocolate is not produced at the beginning of the week, because otherwise the machines have to be cleaned completely, which in turn generates costs. I was very impressed that such processes can be influenced by just a few clicks on the computer. My greatest success was the publication of my written articles on the website. After completing my internship, I can also imagine working in social media after school. 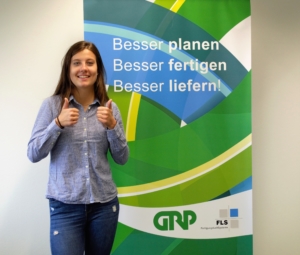